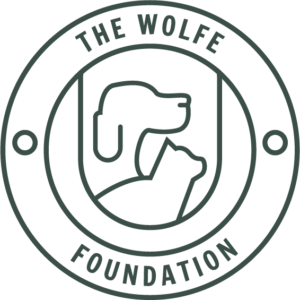 Animals need human help to avoid some terrible fates. Some problems are down to us, others occur naturally but we humans hold the key to their resolution.

Pets in the UK are lucky, we love them, we have expanded our sphere of compassion further than mankind alone, we care about pets, wildlife, the whole ecosystem. We share that feeling.

We want to help more animals than just the pets that we treat.

Wolfe Vets has made a commitment to help three causes and has donated over £3000 since July 2020:

This is our charity and these are our donations. We have not increased our fees to cover the cost of these donations. We genuinely want to help as many animals as we can.

The painted wolf is Africa’s most persecuted predator. It is also its most elusive and enigmatic. The aim of the Painted Wolf Foundation is to raise awareness about this much threatened and ignored species and support organisations that conserve painted wolves in the field.

Dog-like; but neither dog, nor wolf, instead a canid like no other, but, they’ve been persecuted as vermin for over a century and now only 6,500 are left in the wild. In the race to extinction, the painted wolf is winning, it’s the race they never wanted to enter.

A highly social creature where family and the pups are everything, they love nothing more than having fun and playing games. They are Africa’s most successful predatorand are ruled by an alpha female…leader, commander and gentle mother.

Every day families face poverty that is extreme, cruel, and worst of all – unnecessary. But rural Africa is rich with opportunity and where there is land, there is hope.

Our experience, shows that the right farm animals, well- chosen and well cared-for, can be an environmentally sustainable solution to providing the vital nourishment that rural families in Africa need.

We help farmers understand and map out the resources available to them within their community & harness their full potential through techniques such as water harvesting, composting, vegetable growing, tree planting and animal husbandry, which are easily adaptable to each farmer’s own land and needs.

This website uses cookies to improve your experience while you navigate through the website. Out of these, the cookies that are categorized as necessary are stored on your browser as they are essential for the working of basic functionalities of the website. We also use third-party cookies that help us analyze and understand how you use this website. These cookies will be stored in your browser only with your consent. You also have the option to opt-out of these cookies. But opting out of some of these cookies may affect your browsing experience.
Necessary Always Enabled
Necessary cookies are absolutely essential for the website to function properly. These cookies ensure basic functionalities and security features of the website, anonymously.
Functional
Functional cookies help to perform certain functionalities like sharing the content of the website on social media platforms, collect feedbacks, and other third-party features.
Performance
Performance cookies are used to understand and analyze the key performance indexes of the website which helps in delivering a better user experience for the visitors.
Analytics
Analytical cookies are used to understand how visitors interact with the website. These cookies help provide information on metrics the number of visitors, bounce rate, traffic source, etc.
Advertisement
Advertisement cookies are used to provide visitors with relevant ads and marketing campaigns. These cookies track visitors across websites and collect information to provide customized ads.
Others
Other uncategorized cookies are those that are being analyzed and have not been classified into a category as yet.
SAVE & ACCEPT